By Following the US, Australia Consigns Future Generations to Social Immobility

Originally published by the Guardian.

The unemployment rate in Australia was lower than in the United States every single day of the Rudd-Gillard governments, but higher just before Labor was elected and soon after it was defeated. This was a largely-ignored but key takeout from the recently-released labour force data for July, which saw the Australian rate tick up to 6.4% while the US’ dropped to 6.2%.

The unemployment rate in Australia was lower than in the United States every single day of the Rudd-Gillard governments, but higher just before Labor was elected and soon after it was defeated. This was a largely-ignored but key takeout from the recently-released labour force data for July, which saw the Australian rate tick up to 6.4% while the US’ dropped to 6.2%.

This is fact, not opinion. It means Labor oversaw a stronger jobs market here than in the US every day it governed, but Australia’s was weaker than in the US at times under Howard and Costello, and now under Abbott and Hockey. Today, on this measure at least, America’s labour market gathers pace while Australia’s deteriorates. 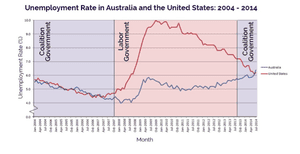 ‘During the peak of the GFC, our unemployment rate was almost half America’s’.

This is a stunning reversal when you consider that during the peak of the global financial crisis our unemployment rate was almost half America’s (see graph). It is also a welcome factual reminder of the success of the stimulus packages detailed and explained in Wayne Swan’s new memoir, The Good Fight.

Meanwhile, his Liberal successor Joe Hockey has been in the headlines for all the wrong reasons; most recently for insensitive comments about “poor” people and petrol. But among the many mistakes already characterising his treasurership, the most damaging may be Hockey’s pursuit of American-style job outcomes and intergenerational stagnation here in Australia, turning Australia’s remarkable recent economic success on its head.

Objective analysis of two other pieces of recent data feed an argument that we are adopting some of the worst features of the American economy. The first was ABS figures released last week, which showed that real Australian wages fell year-on-year for the third consecutive quarter. It was the first time that price inflation has outstripped wage growth for three consecutive quarters since 2008.

Across the Pacific, a decade or more of wage stagnation is one of the most troubling indicators of America’s failure to share the gains of post-war, and now post-crisis, prosperity effectively.

In one of his most fascinating speeches since leaving the prime ministership, Paul Keating attributes American wage stagnation to the fracture of the binding social philosophy of the US kicked off by the Reagan-era shift to conservatism. Published as the last chapter in his book After Words, the speech argues that this shift is marked most clearly by the radical Republican obstructionism of Gingrich in the 1990s, replicated by the Tea party movement more recently, seeking to cement structural inequality in the political framework.

Australians are waking up to the fact that the Abbott government, with Hockey at the wheel, is now trying to drive Australia down this discredited economic and political road. Their first budget asks those on low and middle incomes to carry the heaviest load while the wealthiest gain new entitlements; a fact claimed not just by Labor politicians but proven by the independent National Centre for Social and Economic Modelling (NATSEM).

Judged on their decisions to date, we now have a government that sees inequality as an objective to be met, not a challenge to be overcome. This is appalling in the here and now and devastating for the future. As Miles Corak’s Great Gatsby curve suggests, inequality in one generation breeds inequality in the next, consigning future generations to social immobility.

The risk is that this social immobility then dampens the prospects of future growth. It’s a risk supported by a third piece of largely-ignored recent data, this time from the international ratings agency Standard and Poor’s. In a review of US economic data, S&P found that the extreme levels of income inequality in the US are a drag on long-run economic growth, causing them to lower their expectations of average annual growth from 2.8 to 2.5%.

Their solution? To invest in education – to develop the human capital that benefits not only workers of today, but the workers of tomorrow as well. A far cry from the education funding cuts and changes to higher education access that were introduced in the Hockey budget this year.

Recent US labour market outcomes and their distribution of economic opportunity are not among the many things we admire about that otherwise-great nation. Somehow, as Australians turn on Hockey and his unfair budget in increasing numbers, he still fails to understand this.

First published by The Guardian on 22 August 2014.